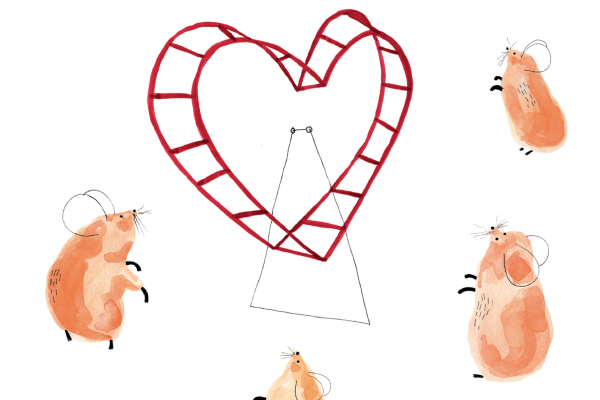 Making the hamster love its wheel

Ideas to change your life - Philosophy and you - Society & Culture
by Patrick Stokes, 19 June 2014

If you ever visit Copenhagen, you’ll probably find yourself trekking out to Langelinie to the statue of The Little Mermaid, and you’ll probably feel pretty underwhelmed when you see it. To make the trip worthwhile, head north to check out the old fortifications at Kastellet, and then wander over to the Nyboder: row upon row of old houses painted in a shade known in Denmark simply as ‘Nyboder Yellow’. These houses were built by Christian IV to house the men of his expanding navy and their families. These families lived their whole lives under martial law, from sunrise until the sound of a drummer boy signalled lights-out every night. And they were, in effect, indentured: boys born into Nyboder families went into the navy automatically.

To modern ears, there’s something horrifying about this whole arrangement. Even the most ardent “bring back National Service!” type today wouldn’t stand for this sort of intergenerational, lifetime conscription. It offends our sense, so basic today that we hardly even notice it, that everyone has a right to pursue the career of their choice. You may not be entitled to success, but all else being equal, you’re entitled to try.

In fact, we go even further than this. We don’t just advocate a free choice among the careers available to us, we imbue that choice with enormous significance, as if the meaning and value of a person’s life largely hangs upon what they choose to do for a living.

The Jungian psychologist Adolf Guggenbühl-Craig once said that in the post-Christian West, love and marriage have been elevated to the status of a ‘secular salvation’. Romantic love has replaced heaven as the focus for our hopes for ultimate meaning and fulfilment, the thing that will make everything turn out alright in the end: and they lived happily ever after. Yet in a way we’ve also done something similar with our careers. Increasingly, we expect what we do for a living to provide a sense of identity and purpose, not just to keep us alive and comfortable.

The process starts early. We ask children “what they want to be when they grow up”, test them in school to see what careers they’re best suited for, and expect them to have at least some idea of what they “want to do with their lives” – which assumes on some level that your job is what you do with your life (as we do every time we ask someone “So what do you do?”). If your career is your life, you obviously want it to be fulfilling. We want what the Greeks called eudaimonia, often translated ‘happiness’ but better rendered ‘thriving’ or ‘flourishing’. So you’d better make the right choice for you – or as a contemporary slogan has it, “do what you love”.

The Nyboder houses remind us how very recent, in historical terms, this emphasis on choice and fulfilment is. For most of human history, ‘career choice’ wasn’t a choice at all. You simply did what your father did, and his father before him. I suspect “do what you love” would have been utterly unintelligible to a medieval peasant. It’s not that such a goal was unrealistic, it’s that it simply wouldn’t have made any sense.

That many of us in the ‘post-materialist’ West now have the option to choose a career we’ll find fulfilling is surely a good thing. Choice is good, preference-satisfaction is good, meaningful activity is good. But are we expecting too much from our working lives?

In one sense, “do what you love” takes the idea of vocation and maps it onto the idea of career. And that’s inherently risky. We now use ‘vocational’ to refer to any sort of job-related education or training, but in its earlier meaning, ‘vocation’ meant ‘calling’ (from the Latin vocātiō, being called or summoned). A vocation in this sense is not something you choose from amongst a set of career options. A vocation is a call you respond to. It chooses you, not the other way around.

Some of us are lucky enough to have that sense of vocation. I certainly do, and I’m deeply grateful for that. But not everyone does. Being told to “do what you love” therefore adds at least two new kinds of (moral?) failing: not having a sense of vocation, and not being able to turn what you’re passionate about into a paying career. Neither of these things, however, are ultimately under our control.

As writer Miya Tokumitsu recently noted, “do what you love” implicitly paints anyone who doesn’t love what they do as a failure, while effacing all those whose unloved work makes vocations possible, and blurring the fact that loved work is still work. My fulfilling job is only possible because many people have jobs they find far less rewarding than mine. “Do what you love,” as Tokumitsu points out, renders their work – and on the assumptions at work here, their lives – invisible at best, meaningless at worst.

The belief that our work-lives should fulfil us also opens the door to a particularly damaging psychological phenomenon. Philosopher William James speaks of the “paradox of a man shamed to death because he is only the second pugilist or the second oarsman in the world.” Kierkegaard – who at one point in either/or has a jaded aesthete wistfully ask “Why wasn’t I born in Nyboder, why didn’t I die as a little child!” – calls this phenomenon despair, by which he means a fundamental desire not to be oneself. The man who says “Either Caesar or nothing!” and then fails to become Caesar becomes intolerable to himself, just because he’s not Caesar and yet still here. What happens when you don’t become an astronaut or rock star? What then?

But according to Kierkegaard, you can still be in despair even if you do become Caesar – by wanting to essentially be Caesar. This is similar to one of the forms of ‘bad faith’ described by Jean-Paul Sartre, a refusal to see yourself as more than the social roles you play for others. Sartre called this bad faith because it’s a denial of our freedom, a denial that we are always more than what our jobs or relationships pick us out as being. Bad faith is, according to Sartre, a way of hiding from our freedom, and therefore our responsibility. But it’s also something others can exploit.

In the first half of the last century, many futurists assumed that better technology would allow us to work fewer hours. That, clearly, hasn’t panned out. Instead, we’re told to work hard, work long, retire later, but love the work we do. There’s nothing particularly wrong with either hard work or loving your job. But identifying so completely with your work, something the “do what you love” mantra seems to push us towards, runs the risk of obscuring that even the best-loved job is still built around economic exchange. The professional cellist is still selling her labour every bit as much as the builder.

Through making these demands of our careers, are we really enhancing our lives? Or might we simply be telling Sisyphus to love his rock, or making the hamster love its wheel? Whose interests are served by that: the worker, or those who profit from their work?

I’m conscious that I’m writing from a position of privilege. I already have a job I love, and I wouldn’t want to suggest that other people shouldn’t want to have that too. Still, it’s always worth asking: where does passion for your career end and Stockholm Syndrome begin? Perhaps questions like that are part of the price we pay for freedom of choice – a freedom which as Sartre said, is something we’ll do almost anything to evade.